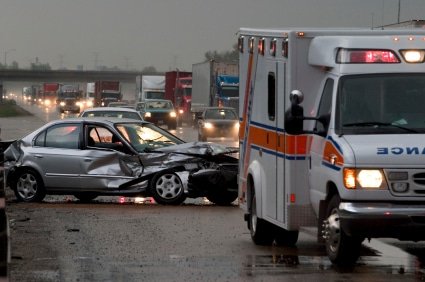 A former UCLA college football player who lost part of his left leg when he was struck by a taxi van while riding his motorcycle in July 2012 in Los Angeles will receive a $27.5 million damage award to compensate him for his severe injuries.

The victim, Amir “Nick” Ekbatani, who is now 29, was hurt on July 14, 2012, when he was riding his motorcycle on Pacific Coast Highway at Diamond Street when a taxi van being driven by Mesfin Kinfu allegedly failed to yield the right-of-way and struck Ekbatani’s motorcycle in the intersection, according to a Jan. 9 report by The (Torrance, Calif.) Daily Breeze.

The plaintiff sued the California Department of Transportation (Caltrans) and the taxi van driver in connection with the crash, alleging that Caltrans knew of the inherent design flaws and traffic dangers in the angular intersection but did nothing to improve safety in the intersection, the story reported.

The plaintiff’s attorneys argued that Caltrans should have made safety changes to the intersection because Diamond Street crosses Pacific Coast Highway at a severe 60 degree angle, drops off and is dangerous, the story reported. The crash could have been avoided had a left-turn signal been in place, because a red light would have stopped Kinfu from making his turn while Ekbatani was proceeding on a green light, the story states. Other safety improvements could have included the two double-yellow lines to create a simulated median on the pavement that would have forced Kinfu and other motorists to drive further toward the center of the intersection before turning left, which would protect adjacent traffic, the report states.

We here at MyPhillyLawyer stand ready to assist you with your legal case if you or a loved one is ever seriously injured in a vehicle incident or accident anywhere in the United States.

We represent the families of victims who die in such tragedies as well, to ensure that their families receive every penny of damages that they are eligible to receive.
Call MyPhillyLawyer at 215-227-2727 or toll-free at 1-866-920-0352 anytime and our experienced, compassionate, aggressive team of attorneys and support staff will be there for you and your family every step of the way as we manage your case through the legal system.