Medical malpractice, also referred to as medical negligence, is the professional misconduct of doctors, nurses, technicians and other medical professionals. In Pennsylvania there must be a preliminary finding of negligence on the part of a physician before a medical malpractice suit may proceed. Medical malpractice lawyers file lawsuits based on the negligent conduct of those individuals and entities. Medical errors do not receive the same attention as major accidents, and can be hidden if not reported.

Malpractice cases are caused by any number of mistakes from medical misdiagnosis to anesthesia errors and from failing to follow a standard treatment protocol to surgical errors. A medical malpractice lawyer can file a medical malpractice claim against hospitals, medical corporations, clinics, individual doctors, physician’s groups, nurses, technicians and insurance companies.

What is medical malpractice?

When health care professionals, through a negligent act or omission, harm or injure a patient, the negligence is known as medical malpractice. The negligence may be in the form of errors in health management or treatment, aftercare or in diagnosis.

About 9.5 percent of all deaths occur due to medical error.

The American Medical Association says medical malpractice is the third leading cause of death in the United States.

How common is medical malpractice?

The American Medical Association says medical malpractice is the third leading cause of death in the United States. In fact, the National Institutes of Health (NIH) report that medical malpractice kills 225,000 people every year. The U.S. patient-care study released in 2016, tracked deaths for eight consecutive years. Researchers discovered that based on 35,416,020 hospitalizations, there was 251,454 deaths per year — about 9.5 percent of all deaths — that occurred due to medical error.

According to the Pennsylvania Patient Safety Authority (PSA) there were more than 302,000 medical errors and nosocomial (hospital acquired) infections in 2017. Fewer than 300 were fatalities.

Over the last 10 years in Pennsylvania, medical malpractice settlements and claims, as documented by the state Insurance Department fund, have held relatively steady, averaging 379 claims and $461,052 in awards. However, the number of unanticipated medical accidents or errors in hospitals, other health care facilities and nursing homes grew by 327 percent to 302,515 between calendar years 2004 and 2017 said the Pennsylvania Patient Safety Authority (PSA).

What can you do if you have been injured?

It is essential that you begin the investigative process as soon as possible. Our lawyers have more than 100 years of combined legal experience and we know how to handle medical malpractice lawsuits that result in obtaining fair and equitable compensation for your injuries.

The most common acts of negligence include, but are not limited to: “They stayed right with me the whole time”

I always knew what they were doing. They stayed right with me the whole time. They don't make you feel like they're the lawyers and you're the client. They're not pretentious. They asked all about my family. They're more than just lawyers. They're really good people.

How a medical malpractice attorney builds a case

A medical malpractice lawyer builds their case around the four elements necessary to win such a case.

A medical malpractice lawyer builds their case around the four elements necessary to win such a case. That process includes, but is not limited to:

Medical malpractice attorneys complete the same education as other lawyers, and that is seven years studying for and obtaining an undergraduate degree and a law degree and passing the bar exam in the state in which they wish to practice. An attorney wishing to specialize or pursue medical malpractice cases may also be board certified and meet exacting standards in the areas of education, ethics, experience, examination and excellence in professional liability law.

There is typically no quick resolution for a medical malpractice lawsuit. Most injured victims wait roughly one year or longer before the suit is filed and then, the case may take two years or more to reach resolution. 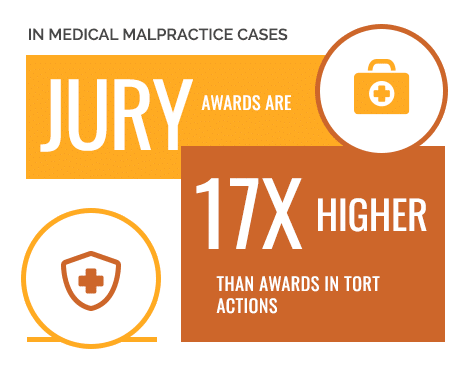 Medical malpractice jury trials tend to result in high median damage awards. Furthermore, awards in medical malpractice trials are 17 times greater than awards in tort actions. The average jury award in a medical negligence lawsuit is roughly twice that of the average negotiated settlement arrived at outside the courthouse.

Our lawyers have more than 100 years of combined experience handling birth injury cases.

If you believe you have been a victim of medical malpractice, contact MyPhillyLawyer today at 215-914-5471 or call toll free 866-920-0352. The sooner you reach out and talk to us, the sooner we can start investigating your case and secure important evidence that may be lost, and interview staff, which may be transferred to another location.

No recovery… no fees or costs… guaranteed.