The Opioid Crisis: What You Need to Know

Opioids, the highly addictive painkillers that doctors routinely prescribe to patients to mask pain, continue to be a growing burden on American society, despite all the warning signs and overdose deaths which occur regularly across our country every day.

The over-prescribing of opioid painkillers over the last few years in the U.S. has fueled a nationwide addiction crisis, which is harming individuals and families, enriching drug companies and causing patients to seek more powerful drugs when the opioids no longer provide the desired effects.

“The key factor in all this is the increase in drug overdose deaths,” Robert Anderson, chief of mortality statistics at the NCHS., told the BBC. Anderson called the two-year life expectancy drop “shocking.”

In 2016, 63,600 people died from a drug overdose, according to the Centers for Disease Control and Prevention (CDC) – up 21percent from the previous year and three times the rate in 1999, the story reported. “Behind the dramatic increase in overdoses among heroin users are synthetic opioids such as fentanyl, which has flooded the U.S. market and is 100 times more powerful than heroin.”

At the same time, death rates fell for seven of the 10 leading causes of death, including heart disease, cancer, stroke and diabetes, making the life expectancy drops even more unsettling. 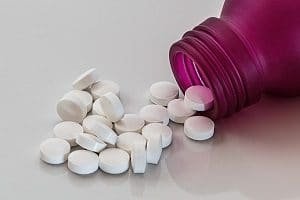 Pills being poured out of a pill bottle onto a table.

In response to the opioid crisis, new litigation is beginning to percolate around the country against drug companies which make opioids, including right here in Philadelphia where the International Brotherhood of Electrical Workers 98 union has been talking about filing a lawsuit against the opioid makers. Last year, the IDEW 98 saw eight of its members die due to opioid addiction after taking the prescribed medicines due to serious and painful work-related injuries and then running into problems taking the substances.

They would go to a doctor who wants to get them back to work as quickly as possible, maybe it’s a worker’s compensation doctor who is on the dole from an employer. And the doctor gives them the pain meds, there you go, a 30-day supply of pain meds, and then again, and again, and again and you’re addicted.

It doesn’t take long to get addicted physically, and you can’t stop without having withdrawal pangs, so you want more and more and more. And it’s so easy to become addicted to these very strong opioids.

At some point, the doctor cuts off the patient’s drug supply, but he doesn’t wean them off the powerful drugs or put them into a rehab center to wean them off. He just cuts them off, which is what causes normal people to go out on the street and try to buy the drugs to salve their addictions. And when they can’t afford the expensive opioids anymore, they move to cheap heroin to try to get the same feeling.

Once you get the need for the next pill, you are done.

This is the track that people are on and it is everywhere. These people are wealthy, poor, black, white, Hispanic, young and old.

And it has become a huge problem for society and for the states and local governments that are having to deal with the issues through rehab and other costly programs and services. A crisis has been designated across the nation in many states, counties and communities.

This had led states including Ohio and Mississippi, to begin their own lawsuits against the opioid makers. Many others are also looking at similar strategies as well.

The argument of such lawsuits is that the opioid manufacturers knew how addictive these drugs are but incentivized doctors to prescribe them nonetheless and downplayed their addictive tendencies to everybody using bogus studies. And these trumped-up studies were paid for by the drug companies.

We here at MyPhillyLawyer are also looking at getting involved in this growing litigation to assist our own clients who might be suffering from these life-threatening issues. I recently discussed the topic on my Court Radio broadcast as well.

The developing opioid cases are similar to how the tobacco litigation brewed up years ago, when cancer-ridden cigarette smokers began suing tobacco companies, arguing that their heinous injuries were caused by products which did not adequately advise them of their dangers.

It’s also similar to the more recent talcum powder litigation, where companies like Johnson & Johnson knew their talcum powder, used by women for many years for feminine hygiene, could cause ovarian cancer. Those companies knew about the dangers but didn’t disclose them and juries across the nation are reacting to the cases and the suffering being experienced by victims by providing awards of $70 million to $100 million in various courts.

If you or someone you know has an opioid addiction and you need help, we here at MyPhillyLawyer stand ready to assist you and discuss your legal case. We are also here to help if you or a loved one is ever seriously injured in any kind of vehicle incident anywhere in the United States. We pledge to make sure that you and your family get the compassionate, dogged and experienced legal representation that you deserve and expect from a professional legal team which works hard to uncover every fact to bolster your case and maximize your damage award.