A 38-year-old Illinois man will receive a $2.15 million settlement after he suffered permanent brain injuries when he was struck by a car as he rode his motorcycle in a Chicago suburb in 2015.

The victim, Wyatt Williams, was riding his 1986 Honda CN250 Helix motorcycle on North Avenue near Maple Street in Oak Park, Ill., in June of 2015 when he was struck by a vehicle being driven by Leslie Mueller, 37, of Glendale Heights, Ill., according to a July 18 story by The (Arlington Heights) Daily Herald. He was wearing a full-face helmet at the time of the collision.

Mueller had turned onto Maple Street from North Avenue when his vehicle crashed into the front of Williams’ motorcycle, the story reported. Mueller was ticketed after the crash for failing to yield while turning left and for not having a valid driver’s license or permit. 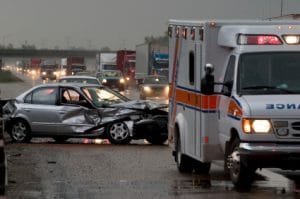 After the crash, Williams was treated at Elmhurst Hospital for broken ribs, a torn ligament in his knee and a head injury, the story states. The victim continues to suffer from chronic pain and a moderate, permanent traumatic brain injury “that causes him anxiety and difficulty concentrating and controlling his emotions.”

Williams’ lawsuit was filed in August of 2015. His attorneys alleged that his injuries also caused him to have difficulty returning to work.

Just before the trial was set to start in mid-July, attorneys for the plaintiff and the defendant announced that they had reached a $2.15 million settlement in the case.