Be Safe and Drive Sober This Holiday Season

The December holidays are here, with Christmas just around the corner and New Year’s Eve coming up fast, so it’s a good time to reflect on the dangers of drinking and driving amid all the holiday parties and family festivities we will all likely enjoy.

In Pennsylvania, the State Police are participating in the National Highway Traffic Safety Administration’s (NHTSA) “Drive Sober or Get Pulled Over” impaired driving enforcement campaign through Dec. 31, joining more than 10,000 other law enforcement agencies across the country that are working to keep people safe over the holidays.

Pennsylvania State Troopers will conduct dedicated DUI patrols and checkpoints to identify and arrest impaired drivers, while a team of certified drug recognition experts — troopers who have received specialized training to distinguish the physiological signs of impairment caused by a wide range of controlled substances — will be on the lookout for drivers who are impaired by drugs as well, according the agency.

“No matter where your holiday celebrations take you, it is important to plan for a safe way home and to never get behind the wheel impaired,” Major Edward Hoke, the director of the State Police Bureau of Patrol, said in a statement. “Don’t put yourself, your passengers, or others at risk by making the decision to drink and drive.”

In 2016, some 37,461 people nationwide died in motor vehicle crashes on U.S. roads, according to the NHTSA.   Twenty-eight percent of those fatalities – 10,947 victims – involved a driver who had a blood alcohol concentration (BAC) over the legal limit of .08.

In Pennsylvania, PennDOT data shows that 297 people died in alcohol related crashes in 2016, with alcohol a factor in 25 percent of all traffic fatalities here last year. 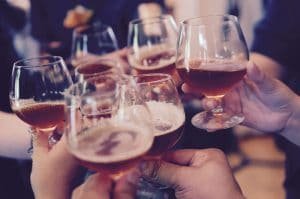 “Driving under the influence has serious consequences that State Police and our local law enforcement partners see every day, which is why we have adopted a zero-tolerance approach to DUI enforcement,” Hoke said. “If you drive impaired, you will be pulled over and you will be arrested.”

A DUI conviction in Pennsylvania can include thousands of dollars in fines, a license suspension and prison time.

To prevent that, the NHTSA created the SaferRide smartphone app, which can be downloaded to a smartphone for free to quickly pinpoint the user’s location and call a taxi or trusted friend for a ride home. The app is available for Android and Apple devices.

We all are responsible, starting with each of us individually, to choose not to consume alcoholic beverages and then hop into our vehicles and drive when our driving skills are impaired.

Bartenders, waiters, waitresses and restaurant and club owners are also responsible through liquor liability laws and dram shop liability to ensure that none of their customers drinks so much that they are visibly intoxicated and a danger to others on the roads.  In Pennsylvania, and in other states, there are training programs for bartenders and wait staffs so that they learn when and how to stop customers who are drinking too much.  The Pennsylvania Liquor Control Board (LCB) offers its  Responsible Alcohol Management Program (RAMP), which offers a full range of important training.

That’s a good thing, but it doesn’t end there.

We recently reminded MyPhillyLawyer blog readers of the potential legal liabilities affecting party hosts when enjoying the season and serving alcoholic beverages to friends, family and colleagues over the holidays.

In Pennsylvania, the Commonwealth doesn’t recognize the legal concept of social host liability, which is when a host serves a visibly intoxicated person and that person subsequently injures himself or someone else while driving drunk. That means that as a host who served the alcohol to that person, you can’t be sued for liability or any damages. This also extends to companies which serve alcohol to employees at company holiday parties – the companies are not responsible if someone is hurt or killed due to the actions of a visibly intoxicated employee or guest who attended the party.

The exception to this in Pennsylvania is if a host serves any amount of alcohol to an underage person. In this case, the social host has absolute liability in any damage or injury claims.

In New Jersey, however, and other states, social host liability is the law and you can be sued by victims if someone at your party drinks to excess and harms someone else in a DUI crash or related incident. Under the New Jersey law, party hosts can be sued and found liable for damages if they continue to serve alcohol to a visibly intoxicated person.

But while Pennsylvania doesn’t include social host liability in its statutes, we all still need to be aware of the issues of holiday drinking and work to ensure our guests head home safely.

You must be able to say no to your friends and loved ones if they party too much. If someone is visibly intoxicated, don’t let them drive away on their own. Get them in a taxicab or find them a ride with someone who has not been drinking. Let them sleep in your spare room. Do whatever it takes to prevent a tragedy.

Remember, don’t drink and drive – it can be a life or death choice. Don’t become one of the statistics or hurt or kill someone else or someone you love by driving drunk and getting into a serious accident.

Have a great time this holiday season, but let’s be responsible and careful out there.